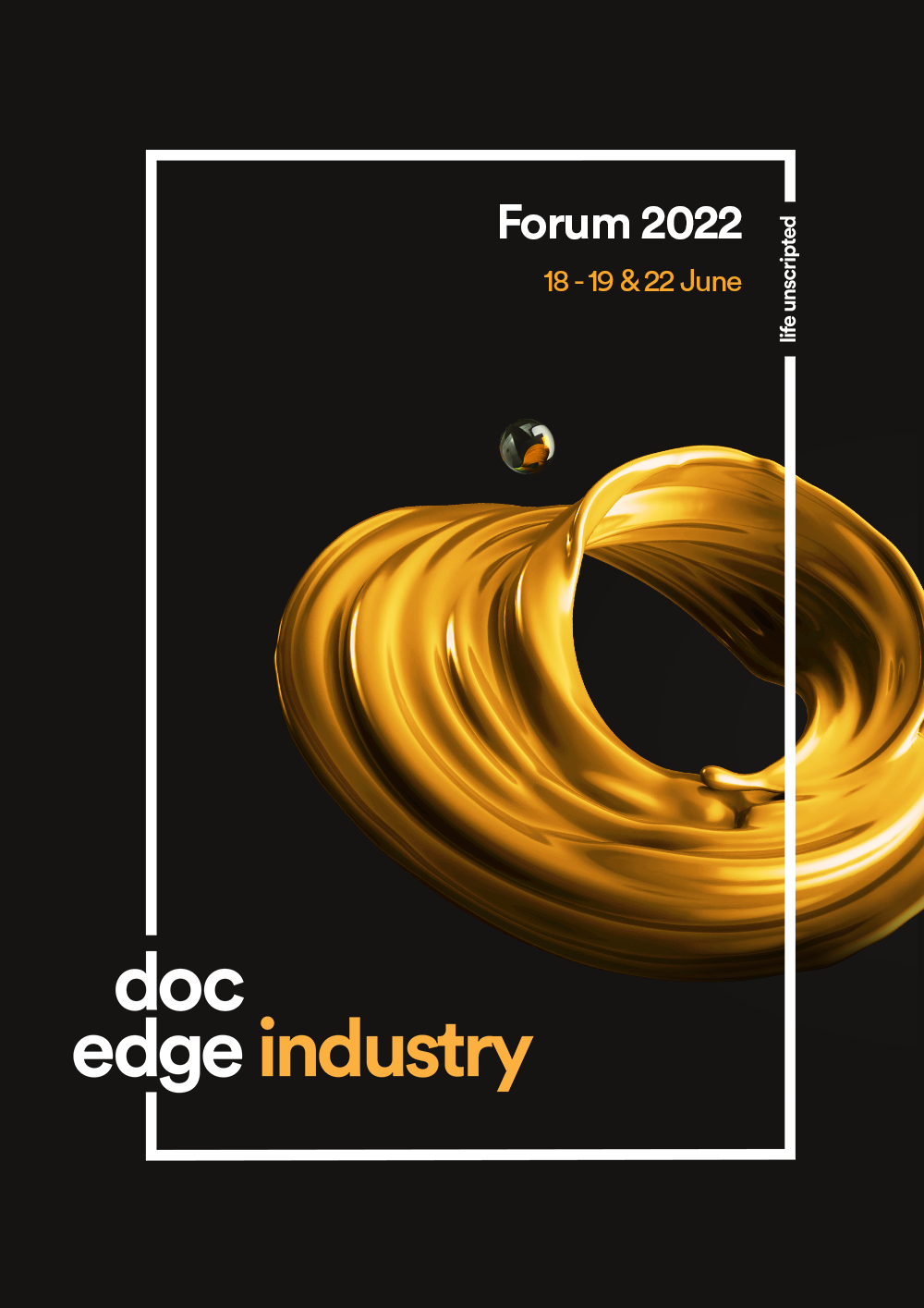 The 2022 Doc Edge Forum will be a hybrid programme of live and online events to accompany Doc Edge, International Documentary Festival 2022. It will be held in Auckland on

Doc Edge Superhero and celebrated Kiwi filmmaker, Dame Gaylene Preston, will deliver a masterclass on Image to Imagination illustrating a lifetime of integrating archival footage into feature films. Preston produced and directed some of the most enduring popular classics of New Zealand cinema. Her generosity of spirit, powerful mentorship and advocacy skills are central to the development of New Zealand’s filmmaking community.

Maya Daisy Hawke is New Zealand’s best kept secret. Her resume includes editing Werner Herzog’s Cave of Forgotten Dreams and this year’s Sundance Film Festival Audience Award winner Navalny. She is an advisor to various Sundance labs including Edit and Story. Hawke is a 2021/22 Sundance Art of Practice Fellow. She will run a masterclass, Proof of Self, a guide on how to be yourself in the cutting room – an illustrated report from the lived experience of being an editor.

David Strong and Cameron Harland, the chief executives of the New Zealand Film Commission and NZ on Air respectively, will deliver keynote addresses.

Four of the world’s leading minds in innovation and funding are coming together for a session on Alternative Funding and Innovation. Gabo Arora, an internationally acclaimed multi-award winning immersive artist, professor and entrepreneur working across the most innovative emerging technologies; Rob Vickery, an Edmund Hillary Fellow, prolific venture capitalist and innovator; Ian LeWinter, President of Ingredient X, the film & software development studio specialising in blockchain DeFi and NFT technologies including co-founder of film.io which uses decentralised architecture of blockchain to democratise filmmaking and the filmmaking industry’s first DAO; and Faisal Zahid, an IT engineer and impact entrepreneur in emerging technologies, will discuss how NFTs, blockchain and innovative thinking are impacting the screen sector.

A panel on Archival Storytelling, presented by Getty Images, will feature Swedish director Magnus Gertten and his runaway successful film Nelly & Nadine which is featured at Doc Edge Festival.

The Forum will feature the Doc Edge XR Exhibition with 24 of New Zealand and the world’s best VR/AR and immersive storytelling projects together with talks by leading practitioners in this area, including acclaimed Kiwi practitioner Raqi Sayed with her project Minimum Mass which featured at the 2020 Venice Biennale.

The Forum’s full programme will be announced soon.

Get your Early Bird Pass

As president of documentary film and television, Diane Weyermann is responsible for the documentary feature film and television slate of Participant Media, a company dedicated to entertainment that also inspires and compels social change. In addition to the upcoming Far From The Tree, Kailash, RBG and America To Me, Participant’s recent documentary projects include Human Flow, An Inconvenient Sequel: Truth To Power, The Music of Strangers: Yo Yo Ma and the Silk Road Ensemble, and Zero Days. Previous releases include the Oscar®-winning films, Citizenfour and An Inconvenient Truth, the Emmy®-winning Food, Inc., and Emmy®-nominated The Great Invisible.
Prior to joining Participant in 2005, Weyermann was the director of the Sundance Institute’s Documentary Film Program. During her tenure at Sundance, she was responsible for the Sundance Documentary Fund. Before her time at Sundance, Weyermann was the director of the Open Society Institute New York’s Arts and Culture Program where she launched the Soros Documentary Fund (which later became the Sundance Documentary Fund)

Peter Gerard is a leading expert in marketing and distribution for films and series, with a focus on emerging digital platforms. From 2014-2017, he worked at Vimeo, where he was most recently General Manager of Entertainment. Prior to joining Vimeo, Gerard was founder and CEO of Distrify. He has also produced and directed a number of award-winning films, including the winner of a BAFTA Scotland New Talent Award.

Co-director, The Point of No Return

Producer/director Noel Dockstader began his documentary career in the UK, where he worked for leading independent production companies October Films and Diverse Productions. His UK credits include Show Runner/Director of several Discovery Channel series: Warrior Women, a popular history series hosted by Lucy Lawless of Xena, Warrior Princess fame, Hero Factor, exploring the science of sudden acts of heroism, and Trailblazers, a 13-part series following the adventures of scientists and journalists in some of the most dangerous regions of the globe. His previous work includes content for National Geographic.

Hollie’s films have screened at festivals both within Australia and internationally including Children of The Rainbow Serpent (NITV), Common Ground (SBS), and Corinna and Very Impressive.
Hollie’s first documentary feature was in The Good Pitch Australia. The Opposition was set upon by legal challenges as she fought to tell the story set in Papua New Guinea and the UK. Its world premiere occurred at IDFA 2016 before going on to win the Grand Prize at FIFO 2017 and also screened at the UN Human Rights Council in March 2017.

Since beginning at Film Australia in 1989, Fiona has built strong relationships with producers and international content buyers. At SBS from 1996, Fiona worked to market drama and documentary content across all platforms worldwide. Establishing her consultancy business Fi’sAbility in 2009, Fiona worked with independent producers to maximise commercial opportunities for their content and explore new business models. In 2011 Fiona joined Flame Media’s start-up distribution business – Flame Distribution – as Content Sales & Acquisitions Director. Flame’s catalogue of 3,000 hours of unscripted content is produced by over 160 independent filmmakers from around the world.

Co-director, The Point of No Return

Prior to Far West Film, Quinn co-produced Supercoasters, a two-hour special for National Geographic on the science of roller coasters. She wrote and co-directed several history and natural history documentaries for Discovery Channel and Travel Channel, such as Revolution on Wheels, a global history of motorcycles. Quinn also directed and wrote Sharks under Glass for Discovery’s hit series, Shark Week. She also produced the San Francisco episode of Lonely Planet’s acclaimed international travel series, Six Degrees, which broadcast internationally on Discovery.

9:00 am Session 1: What is Cinematic? Marcus Vetter

11:30 am Session 3: Narrative and The NOW. Alexandre O’Philippe

The Organisers reserve the right to make changes to sessions and speakers. Please check this page regularly for updates

8:00 am Register and grab yourself a cuppa tea or coffee

The Organisers reserve the right to make changes to sessions and speakers. Please check this page regularly for updates