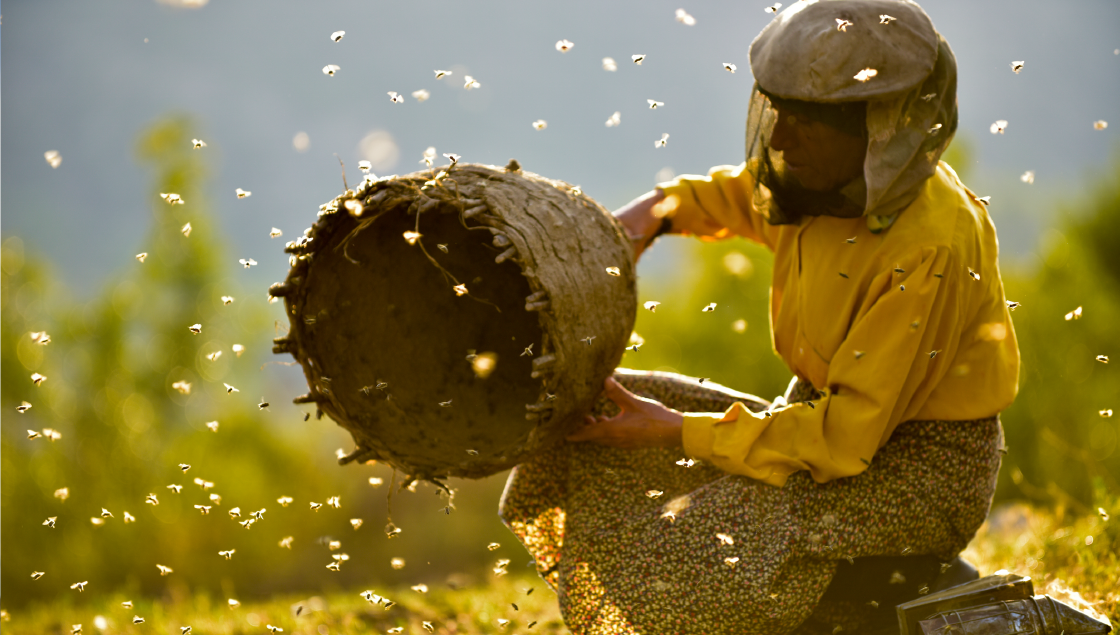 DIRECTED BY
2019
Macedonia
85 min
BUY TICKETS ADD TO FAVOURITES
“A microcosm for a wider idea
of how closely intertwined nature and humanity are.”

Just as worker bees spend their entire lives taking care of the queen bee which never leaves the hive, Hatidze Muratova has committed her own life to the care of her blind and paralysed mother.

Nestled in an isolated mountain region deep within the Balkans, Hatidze and her mother live in a village without roads, electricity or running water. They’re the last in a long line of Macedonian wild beekeepers, eking out a living farming honey in small batches to be sold in the closest city – a mere four hours’ walk away.

Hatidze’s peaceful existence is thrown into upheaval by the arrival of an itinerant family, with their roaring engines, seven rambunctious children and herd of cattle. Hatidze optimistically meets the promise of change with an open heart, offering up her affections, her brandy and her tried-and-true beekeeping advice.

However, it doesn’t take long before the itinerant family’s patriarch, Hussein, senses opportunity and develops an interest in selling his own honey.

“This bitter and beautiful Sundance-winning doc focuses on a single beekeeper as though our collective future hinges on her hives.”
– IndieWire

Hussein has seven young mouths to feed and nowhere to graze his cattle, and he soon casts Hatidze’s advice aside in his hunt for profit. This causes a breach in the natural order, exposing a fundamental tension between nature and humanity, exploitation and sustainability.

Even though the family provides a much-needed respite from Hatidze’s isolation and loneliness, her very means of survival are threatened.

The debut feature from filmmakers Ljubo Stefanov and Tamara Kotevska, Honeyland was shot over three years by a skeleton crew committed to an intimate collaboration between filmmakers and subject.

Honeyland is visually ambitious, driven by an unexpectedly dramatic narrative and a surprising sense of humour. This tough and tender portrait of the delicate balance between humankind and nature offers a glimpse of a fast disappearing way of life, and is an unforgettable testament to one extraordinary woman’s resilience.