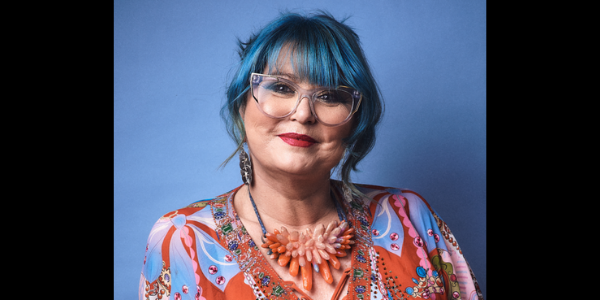 Heather Croall is honoured as the recipient of the 2021 Doc Edge Festival Superhero Award.

The 16th annual Doc Edge Festival kicks off its first fusion edition in-theatres (Auckland and Wellington) and online nationwide in just seven weeks with a full programme of over 80 feature length and short films. Yer Old Faither, from world-renowned documentary guru Heather Croall is one of 15 films just announced for the festival. Doc Edge is proud to honour Croall as the recipient of the 2021 Doc Edge Superhero Award, which recognises the recipient’s outstanding contribution to documentary.

Following her success as Director and CEO of the Australian International Documentary Conference (AIDC), Croall took on the herculean task of Director and CEO at Sheffield Doc/Fest (UK). She tripled industry delegate numbers and increased public attendance from 2,000 to 25,000 and generated £5.6 million (NZD10.8M) per year worth of business for producers at the festival. Croall is especially known for building fruitful marketplaces for film, art, theatre and immersive projects. Croall previously sat on the US Documentary jury at Sundance Film Festival and her producing credits include Atomic: Living in Dread and Promise, The Big Melt, Girt by Sea, Paradise Bent and We of Little Voice. Through Crossover Labs, Croall dedicated much of her career working in the innovative, cross-disciplinary space where art, film and storytelling meets technology, innovation and social change. She is currently the CEO and Festival Director of Adelaide Fringe which she grew to become one of the world’s largest festival during a global pandemic, selling over 630,000 tickets to the value of AUD16.4 million (NZD17.4M).

“I’m full of gratitude and pretty overwhelmed at hearing I have won the Superhero Award. I share the award with the thousands of people that I have had the pleasure of collaborating with over the last 30 years. I have been so inspired by creatives who aim to make the world a better place with their amazing stories and projects and I always try to support them with opportunities in the marketplaces and the programmes I have run.

Thank you, Doc Edge, for this unexpected honour, I am so grateful to join the illustrious list of Superhero Award winners.” – Heather Croall

After the first announcement in March of three Kiwi world premieres  and ahead of the full programme going live on 27 April, Doc Edge is thrilled to announce a further 15 films playing in this year’s festival. From music that has touched the world, heartfelt and personal stories of family, to some important topics of today – climate change, COVID-19, mortality and immortality.

15 STORIES FROM AROUND THE GLOBE

7 Years of Lukas Graham
Director: René Sascha Johannsen | Denmark | NZ Premiere
Follow Europe’s biggest export star Lukas Forchhammer (lead singer of Lukas Graham) as he wrestles with stardom and the notion of “having it all” after topping the charts with their hit song 7 Years.

100UP
Director: Heddy Honigmann | Netherlands/Belgium/Norway
From 2019 Doc Edge Superhero, Heddy Honigmann, comes a surprising tale of the life and times of 100+ year-olds from around the world.

A Distant Thud in the Jungle
Director: Céline Rouzet | France/Belgium
In a quest for modernity the Wabiria family and their clan from Papua New Guinea agree to sell their land to ExxonMobil, but the money never comes. A world quietly disappears while only a few kilometres away tourists take snapshots of dances that have become meaningless.

A.rtificial I.mmortality
Director: Ann Shin | Canada
Doc Edge Alumni filmmaker Ann Shin explores the latest advancements in A.I., robotics and biotech with scientists and visionaries to pose the question: if you were able to create an immortal version of yourself, would you?

Don’t Be Afraid if I Hug You
Director: Niccolò Maria Pagani | Italy | NZ Premiere
The touching story of the relationship between a father and his adult son with autism as they travel across Europe to the Sahara on a motorbike.

Laura’s Choice
Directors: Sam Lara, Cathy Henkel | Australia
Laura Henkel is an eccentric, outspoken, feisty 90-year-old who has decided she wants to end her life on her own terms. She asks her daughter Cathy and granddaughter Sam, both filmmakers, to make a film about it.

Lift Like a Girl
Director: Mayye Zayed | Egypt/Germany/Denmark,
On a busy, noisy street corner in Alexandria, a seemingly vacant corner lot surrounded by chain-link fencing is the training site of Egypt’s most elite champions – female weightlifters.

The Magnitude of All Things
Director: Jennifer Abbott | Canada
Merging stories from the frontlines of climate change with recollections of the loss of her sister, Abbott draws intimate parallels between personal and planetary grief.

The Rossellinis
Director: Alessandro Rossellini | Italy/Latvia
Alessandro, the eldest grandson of legendary film director Roberto Rossellini, assembles a witty portrayal of the bittersweet lives of his much celebrated family dynasty.

Silence of the Tides
Director: Pieter-Rim De Kroon | Netherlands/Germany
A cinematic masterpiece that beautifully captures the largest tidal wetland in the world, the Wadden Sea, and explores the fragile relationship between man and nature.

Wuhan Wuhan
Director: Yung Chang | USA/Canada
At the height of the coronavirus outbreak in Wuhan city, five heart-wrenching stories intersect, revealing the universality of our struggles and experiences.

Yer Old Faither
Director: Heather Croall | Australia
In this affectionate portrait, the life of one man and his passions are revealed through his daughter’s eyes, director Heather Croall (Doc Edge Superhero 2021).