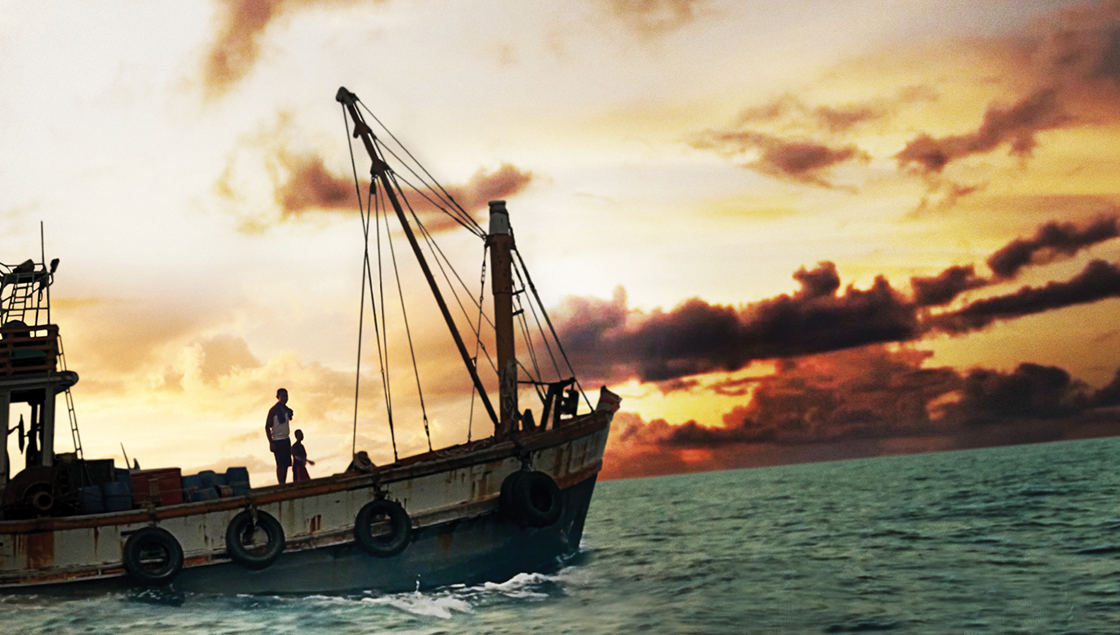 There is no greater force on Earth than the promise of freedom.

The Gulf of Thailand, once teeming with life, is now barren. Decades ago, Thai boats plied rich waters and came home full after a few days or weeks.

Due to over-fishing, lax legislation and even more lax enforcement, Thailand’s fishermen are driven further and further from shore to find fish. At sea for years, captains chase fish as far away as Ethiopia. As Thailand’s prosperity increases, fishermen are finding more family-friendly work and the enormous Thai fishing fleet – the second-biggest supplier of fish to the United States – is short of tens of thousands of men.

Human trafficking gangs have stepped into the gap, luring men out of villages in Cambodia, Bangladesh and Myanmar with false promises of well-paying jobs in prosperous Thailand.

“…kept at sea in slave-like conditions, brutalized by those in charge, fed amphetamines so they could work around the clock.”
– Variety

Instead, these traffickers sell the men to ships’ captains for a few hundred dollars. The captives are held at sea, no land in sight, for years on end. Boats make perfect prisons.

Meanwhile, families wait for their men to return – elders plough fields, wives hold funerals after years of absence. Entire villages in Cambodia and Myanmar are eerily without men.

Patima Tungpuchayakul has committed her life to help these ‘lost’ men. In recognition of her work, Patima was nominated for the Nobel Peace Prize in 2017.

She and the advocacy organisation Labour Rights Promotion Network Foundation share the testimonies of enslaved men and footage from rescue missions. In the face of illness, death threats, corruption and complacency, their fearless determination for justice inspires, but raises as many questions as it answers.

Ghost Fleet received a Special Mention in the International Feature category at the Doc Edge Awards 2019.

Ghost Fleet: VR immerses viewers in the true story of slavery in the Thai fishing industry. The VR experience is based on the story of Tun Lin, one of the film’s main characters.

Tun Lin was was kidnapped when he was 14, and forced to work on fishing boats for 11 years. Journey with Tun Lin as he retraces his ordeal, the years of horrific treatment on board a slave ship, and his eventual escape from the prison made of water.